Sport unites and inspires. This unique, man-made phenomenon has somehow become present in almost every aspect of our lives. While a great number of people choose sports as their career, others like to feel connected to it in other ways. Some people remain sports fans by using Betting Bonus and taking chances on their favorite team or player. Others, more dedicated ones, go to express their love in stadiums.

A stadium is an experience. For fans, every second, from the moment they see its shape in the distance to the moment they are heading back home, is an event to be remembered. However, there are some stadiums that manage to fascinate even those who are not sports fans. These architectural wonders become a tourist destination for everyone due to their fantastic size, design, and overall appeal.

What happens when Chinese artists like Ai Weiwei and architect Li Xinggang join forces with Swiss architects Herzog & de Meuron? You get one of the most impressive sports stadiums in the world, Bejing National Stadium. Also now as the “Bird’s Nest”, it hosted the opening and closing Olympics and Paralympics in 2008.

The 57,343-seat beauty is located in Munich, and it the most popular sports stadium in Germany according to Cicero. It is the home to both Bayern and TSV 1860. Architect Herzog & de Meuron completed it in three years. Its exterior boasts 2,760 inflated ETFE foil panels, and each can change three colors – white, blue, and red.

Zuoying District of Kaohsiung City in Taiwan is the home to a stadium that is loved by the planet. And we literally mean planet Earth. This stadium has over 4,000 solar panels, yielding over 1 million kilowatt-hours of energy.

Johannesburg or the Soccer City is the home town of FNB stadium that features 95,000 seats. It is the biggest stadium in Africa. Meant to resemble an African pot, its exterior boasts earthen hues and an illuminating circle at the bottom part. 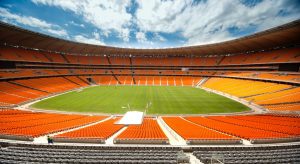 Number 5 on our list comes all the way from Montreal, Canada. In terms of seating places available, this is Canada’s biggest stadium featuring 66,000 seats. It is most commonly described as a wonder of organic modern architecture.

Polish National Stadium is home to their national football team. This 58,000 seater is painted in silver and red, and the upper side features a retractable roof. The stadium was completed in 2011.

Situated at the base of Signal Hill, Cape Town Stadium hosted FIFA World Cup in 2010, and many other events. Boasting Teflon-coated fiberglass on its exterior, it offers a unique reflection of the city’s changing weather. 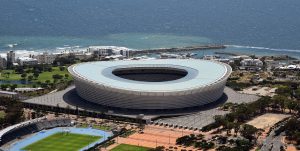 Even though it was built for the 1972 Olympics, Olympiastadion was later on used for important events lie the World Cup. The sweeping glass canopies exterior leave every visitor breathless, as well as the interior that features over 69,000 seats.

It would be odd if the country with some of the greatest football teams didn’t have a stadium to be proud of. The home of the English national football team is also the second biggest stadium in Europe.