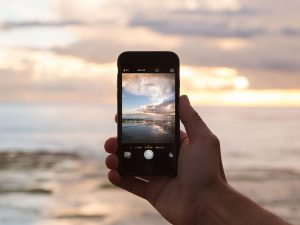 Not long time ago, taking pictures was not an everyday activity. When somebody brings a camera to take some pictures people get excited and prepare the whole day long to look good in the picture. And for someone to bring their camera meant something special – a special occasion, a birthday party, a wedding party or some other kinds of parties. However, times have changed. The modern period brought new technologies. We do not need anymore a camera to take pictures, we can use modern phones, smartphones.

With the appearance of smartphones and the Internet, taking pictures has become part of everyday activities. We take pictures all the time. When we compare old cameras with our smartphone cameras, smartphone cameras have more options and better pictures can be made in comparison to old, regular cameras. Smartphones give us many new options, to edit pictures to share it on social networks, and many other options. This is very important since the majority of people posts pictures on the Internet, on various social networks, such as Facebook or Instagram, so it is important to have good pictures. Therefore, in the following paragraphs, we will give you some tips and tricks on how to make better pictures on your smartphone.

Gridlines are very important in making good pictures on your mobile phone. What are gridlines? Gridlines are a series of lines on your screen which are based on the rule of thirds. The rule of thirds implies that a picture should be divided horizontally and vertically into thirds so that one picture consists of nine parts. Turn on the camera’s gridlines and see how it works on your picture!

One of the photo rules says that the subject should take only one-third of the picture, while the other two thirds should be occupied by a negative space that helps the main focus stand out even more. So focus on the subject and set up the shot.

Try to create the illusion of depth or height by taking pictures from various angles and perspectives. This makes the subject stand out in a more unusual way. For example, take a photo from the bottom and use the sky as a negative space. The subject will stand out more and you will get the illusion of height.

Reflexions can be your best buddy when taking pictures. Whenever you have some water, mirrors and other places where you can find reflections, use them in the picture, this will make your picture more beautiful.

If you want to have perfect pictures you need to make an effort, use the rules and guidelines and play with photos!