Over the course of history, the most popular and top-selling form of visual art has been painting. However, nowadays there is a great number of different visual art forms that deserve our attention as much as painting does. These include photography, printmaking, sculpture, ceramics, crafts, architecture, photography, video, filmmaking, graphic design, fashion design, industrial design, decorative art, performing arts, conceptual art, textile art and so on. Here we present you a list of some of the greatest contemporary visual artists and their works. 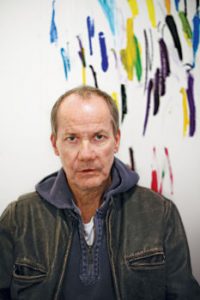 Richard Prince is American painter and photographer. He specializes in rephotography, a form of appropriation art, in which artists recreate old photographs. In his works, Prince criticizes the modern approach to reality depicted in advertisements. His greatest works include series named “Cowboys”, “Jokes”, “Gangs”, “Hoods”, “Celebrities”, “Check Paintings” and “Nurse Paintings”.

David Hockney is one of the most influential contributors to the pop art movement in England. He is a painter, draftsman, printmaker, stage designer and photographer. His style is greatly inspired by the works of Pablo Picasso and his affinity for cubism is obvious in his photo collages. He has created over 200 portraits of his family and friends using camera lucida, an antique lens-based device.  His greatest works are “The Splash”, “A Bigger Grand Canyon”, “Beverly Hills Housewife”, Woldgate Woods” and “Pacific Coast Highway and Santa Monica”.

Gerhard Richter is a German painter, photographer and craftsman who coined the term Kapitalistischer Realismus as an anti-style of art. His style is of dual nature: he paints both photo-realistic and abstract paintings. His photo-realistic paintings are created in two steps – he chooses a photograph of a certain subject which he then paints. Richter’s greatest works include a stained-glass window in the Cologne Cathedral, the painting “Joy of Life”, the mural “Worker’s Struggle”, and a panorama of Dresden entitled “Townscape”.

Antony Gormley is a British sculptor who ranked 4 on the Daily Telegraph’s list of “100 most powerful people in British culture” in 2008. The main theme in his works is the human body as a whole, and he has actually used his own body to make metal casts. Gormley considers the human body not as a container for the soul but as the only true home it will ever have. His greatest works are “The Waste Man”, “Asian Field”, “Event Horizon”, “One & Other”, “Expansion Field” and “Stay”.

Sir Anish Mikhail Kapoor is another British sculptor who was knighted for services to visual art in 2013. He uses materials such as granite, limestone, marble, pigment, and plaster, quarried stone, stained glass. The most common themes in his artwork are geometric or biomorphic shapes, matter and non-matter. His greatest works are “Sky Mirror”, “Temenos”, “Cloud Gate”, “Leviathan”, and “Arcelor Mittal Orbit”.

Takashi Murakami is a Japanese painter and sculptor, but he also works in the commercial area including fashion, merchandise and animation. Murakami’s art combines traditional Japanese art and popular Western art and his style is known as “Superflat”. The most frequent motifs in his works are smiling flowers, mushrooms, skulls, Buddhist iconography and the otaku culture.