Canvas, brushes, paint, a piece of soul and you have a creation that God would envy. Geniuses in their own right, these people achieved immortality through their paintings. We present you the greatest masters of painting of all time. 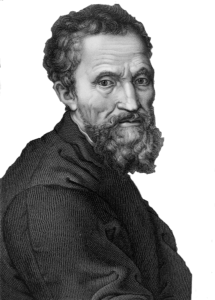 We’ll start with Michelangelo who is considered one of the greatest artists of all time. He was a painter, a sculptor, and an architect.  His greatest works include the stunning fresco on the ceiling of Sistine Chapel, “The Last Judgement”, and “The Creation of Adam”.

Leonardo da Vinci was the greatest renaissance artist. He was a painter, a theorist, a scientist and a draftsman. As a man of science, he highly regarded correct proportions in his art. He mastered oil painting, especially the technique of blurring outlines or hiding them in shadows. Some of his greatest works are “Mona Lisa”, “Salvator Mundi”, and “The Last Supper”.

Rembrandt van Rijn is considered to be the greatest portraitist of all time. Using light and dark colors, he was capable of capturing the soul of his models. Except painting portraits, Rembrandt is also well-known for biblical illustrations. His greatest work is “The Night Watch”.

Francisco Goya was an oil painter, a fresco painter, a sketcher, and an engraver. He became famous for his portraits, religious art and tapestries which he designed for the Spanish court. Goya addressed the most pressing problems in Spain, such as the Inquisition, violence and the disasters of war, the exploitation of women, superstition. Some of his greatest works are “The Third of May 1808”, “The Nude Maja”, and “Saturn Devouring His Son”.

Pierre-Auguste Renoir, one of the most famous French painters, was one of the earliest members of the impressionist movement, which was all about painting everyday life. He was exceptionally gifted in painting portraits, which won him favor with the French aristocracy who provided him with financial security. His status allowed him to explore his art, and by the year of 1819, he formed his own style reminiscent of the old masters. His greatest works include “Luncheon of the Boating Party” and “Nude”.

Claude Monet was the founder of impressionism. His works capture the subtle movement of light over landscapes and are characterized by heavy brush strokes. His series “Water Lilies” represents his most popular work.

Paul Cezanne was a post-impressionist painter who developed a style that distinguished him from his predecessors and avant-guard contemporaries. He is famous for painting romantic and classical scenes in dark colors with expressive brush strokes. The most common themes of his paintings are portraits, still life and landscapes. His best-known works include “The Card Players”, “The Bathers” and “Jug, Curtain and Fruit Bowl”.

Salvador Dali is regarded as the most famous surrealist painter, although he was expelled from the surrealist movement. In his paintings, Dali shows us a new world that is surreal, bizarre, and, without any doubt, memorable.  His greatest works are “The Persistence of Memory “, which is considered to be greatest piece of surrealist art, “Galatea of the Spheres” and “Swans Reflecting Elephants”.

Pablo Picasso was a sculptor, a writer, a painter and a co-creator of cubism. Picasso’s works reshape reality in a unique, geometric manner. He created over 50,000 pieces of art, and his most famous paintings are “Guernica” and “Les Demoiselles d’Avignon”.